Back to Lieutenant Charles Clapperton Jig

LIEUTENANT CHARLES CLAPPERTON JIG. AKA - "Lieut. Chas. Clapperston's Jigg." Scottish, Jig (6/8 time). D Major. Standard tuning (fiddle). AAB. The melody appears in the 1840 music manuscript collection of multi-instrumentalist John Rook of Waverton, near Wigton, Cumbria. Rook credited the tune in his MS. to fiddler-composer James Porteous (1762-1847) of Annandale, Dumfries, Scotland. Porteous composed a few tunes for the Clapperton family of Annan, including "James Porteus' Lamentation for Old Dr. Clapperton" which appears in the c. 1850 music manuscript copybook of Lake District (Cumbria) fiddler William Irwin, now lost but partially transcribed by Anne Geddes Gilchrist in the mid-20th century. "Lieutanant Charles Clapperton Jig" also appears in Gilchrist's list of tunes from Irwin's manuscript, but unfortunately it was not one of the tunes transcribed by her.

First Lieutenant Charles Clapperton was a member of a large Scottish medical and military family, headed by "Old Dr. Clapperton," who was probably George Clapperton (1753-1816), who married Margaret Johnstone (d. 1792). Their son Charles joined the Royal Marines, but seems to have served primarily in Britain, based at Chatham. His brother George joined his father's medical practice but died three years later, in 1811. Brothers John and Alexander perished abroad; John, also a Lieutenant in the Royal Marines fell in active service in the West Indies in 1804, and Alexander died off the coast of West Africa where he served for several years as surgeon on a slave ship. Brother William qualified as a Naval Surgeon and served in the combined fleet at Trafalgar, and a sister married and moved to Edinburgh [see Jamie Bruce Lockhart's A Sailor in the Sahara (2007)]. There were several childhood and/or infant deaths as well. It was brother Hugh Clapperton (1788-1827) the youngest of the six sons, however, who achieved lasting fame as an African explorer. Hugh participated in several expeditions into the continent, and who perished there at Sackatoo. This account of his end was printed in The Museum of Foreign Literature, Science and Art, Volume 13 (p. 671): 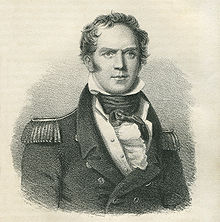 He had been detained five months in that capital; the Sultan Bello not permitting him to proceed on account of his war with Bornou. Hoping to obtain leave to go to Timbuctoo, he had lived in a small circular clay hut, belonging to the sultan's brother. He was attacked with dysentery: in the latter stages of the disease, he declined rapidly, and became emaciated. Lander, his faithful servant, who, after his death, got permission to return to England, states that, two days before Captain Clapperton died, he requested to be shaved, as he was too weak to sit up. After the operation, he asked for a looking glass, remarked that he was "doing better," and should certainly "get over it." The morning on which he died, he breathed loud, became restless, and shortly afterwards expired in Lander's arms. His remains were buried by jim, at Jungali, a village five miles south-east from Sackatoo. The corpse was conveyed by a camel, and the place of interment was marked by a small square house of clay, erected by Lander, who, with five slaves, followed his master to the grave.

Lander, after encountering many difficulties and dangers. arrived in England early in the spring of the present year; having contrived to conceal a watch of his late master's, which had originally meant to be presented by Captain Clapperton, to Bello on his taking leave of that prince.

In 1823 Charles Clapperton married Mary, eldest daughter of Joseph Johnston of Dalhook (or Dalton Hook), Dumfriesshire. James Porteous's composed tunes such as "Miss Jane Johnston's" strathspey and reel and "Mrs Hope Johnston’s" strathspey and reel (listed in the Irwin copybook contents), and these are perhaps relatives of Mary. Given that Charles's mother was a Johstone, it seems likely that Mary was his cousin. Charles Clapperton died at Chatham in 1828, while Mary outlived him by several decades, dying at Chatham in 1862 at age 63. The couple had two children; a boy died in infancy, and a daughter survived to adulthood but died a few years before Mary.

Back to Lieutenant Charles Clapperton Jig