Back to Lieutenant Howard Douglas[edit]

LIEUTENANT HOWARD DOUGLAS. Scottish, Strathspey. D Major. Standard tuning (fiddle). AAB. The strathspey has been identified as one of Niel Gow's compositions, according to David Green and Phil Hresko, although Paul Cranford (1997) and others attribute it to Robert Mackintosh. There was a Lieutenant Howard Douglas, the son of Sir Charles Douglas who served at Quebec in 1776. In 1795 Douglas was the Officer in Charge of army personal on The Phyllis, a transport carrying immigrants, soldiers' dependents and some army officers and men. The ship was wrecked off the bleak coast of Labrador, and the survivors made a harrowing escape to land where they were marooned for a winter until rescued. Douglas later became General Sir Howard Douglas [1], 3rd Bart, a career office and administrator who served as Governor of New Brunswick (1823–31), and, later in life, as a Member of Parliament. 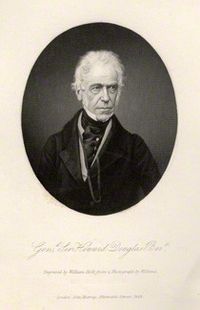 
See also listing at:
Alan Snyder's Cape Breton Fiddle Recordings Index [2]
Hear the 78 played by Bill Lamey at the Internet Archive [3] [4] (first tune in medley, followed by "Forest of Gaick (The)" and "Mrs. Stewart of Garth")

Back to Lieutenant Howard Douglas[edit]