Life on the Ocean Wave

Find traditional instrumental music
This is the stable version, checked on 3 November 2020.
Jump to: navigation, search

Back to Life on the Ocean Wave 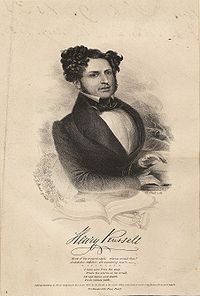 LIFE ON THE OCEAN WAVE, A. AKA – "Ocean Waves (1)." AKA and see "Over the Ocean Waves," "After the Ball is Over." English (originally), American; Song Tune, March, Waltz and Quadrille. USA; very widely known. C Major (): G Major (Bégin). Standard tuning (fiddle). One part (Bégin): ABB. The tune was composed by Henry Russell [1] (1813–1900) in 1838, with words by Epps Sargeant, after the two had strolled along The Battery in New York harbor and watched the ships come in. Russell was born into a Jewish family (he was the great-nephew of the British Chief Rabbi Solomon Hirschel) in Kent, England, but lived in America from 1835–1841.

The song's title comes from the opening words. The melody is the regimental march of the Royal Marines (Winstock, 1970), and, in the United States, it is the official march of the U.S. Merchant Marine Academy. In southwestern Pennsylvania it was played as both a waltz and a quadrille, the first strain remaining the most intact (Bayard, 1981). Mark Wilson (liner notes to Rounder 0529) explains the term 'quadrille' was applied to 6/8 tunes in America, "although they can properly represent only fragments of a true, multi-parted quadrille. The specialized employment of the term 'jig' for a piece in 6/8 is of fairly recent vintage (although the term itself is ancient) and, in any case, the Midwestern 'quadrilles' are not phrased in conventional jig time." The tune title appears in a list of traditional Ozark Mountain fiddle tunes compiled by musicologist/folklorist Vance Randolph, published in 1954. The melody was adapted as a 'singing call' for square dances, beginning "First two ladies/gents cross over," widely known in the United States, which Paul Gifford dates to the 1880's. "Way to Judique" is a related tune.

A version of the tune appears as "A Life by de Galley Fire" in The Complete Preceptor for the Banjo (1851, p. 12), a volume written by Elias Howe, whose pseudonym Gumbo Chaff was taken from Thomas Dartmouth Rice's 1834 blackface character. Howe sold the rights to the tutor and others of his publications to another Boston publisher, Oliver Ditson, who purchased them with the proviso that Howe not published similar works for ten years. Ditson reprinted the Gumbo Chaff tutor in 1851, and also used the same material in a violin tutor of 'Ethiopian melodies', printed the same year.

Back to Life on the Ocean Wave