Back to Limber Elbow 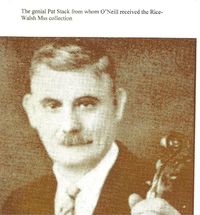 Source for notated version: Chicago fiddler Patrick Stack (1888-?) [O'Neill], originally from Ballyconry, North Kerry, whom O'Neill characterized as "...a fiddler whose execution was no less admirable than his modesty." Stack made several 78 RPM recordings for Victor in 1926, with uilleann piper Tom Mullaney.

Back to Limber Elbow