LINLITHGOW LOCH. AKA and see "Provost Dawson's Favorite." Scottish, Strathspey. D Major. Standard tuning (fiddle). AAB. Composed by William Marshall (1748-1833) and named for a lake situated in Linlithgow, to the west of Edinburgh, Scotland. The tune is subtitled "Provost Dawson's Favorite" in honor of Provost Adam Dawson who lived at the old Bonnytoun House on the shores of Linlithgow Loch (Moyra Cowie, The Life and Times of William Marshall, 1999). Dawson was a partner in a distillery named A & J Dawson, and a supporter of the Whig party and the Reform Act of 1832. Cowie says he is remembered for his warmth and keen sense of humor. 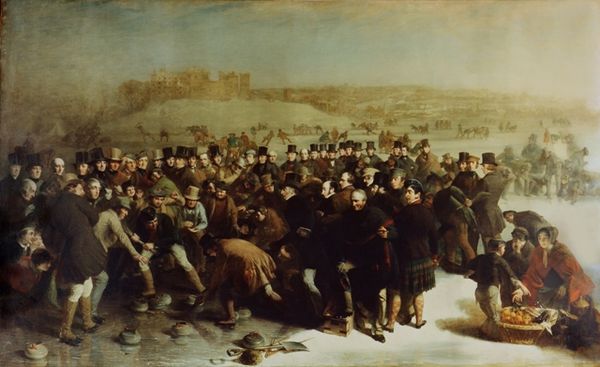 "The Grand Match at Linlithgow Loch" by Charles Lees (1849). The painting depicts a curling contest

Linlithgow was the site of an important royal residence, Linlithgow Palace, now in ruins. It was already a royal manor house by the time Edward I of England garrisoned it and used it as a base prior to the battle of Bannockburn. Afterwards it reverted to the Scots. James I began the transformation to a large fortified castle in in 1424, and later Mary, Queen of Scots was born there. The castle was destroyed in 1746 during the Jacobite uprising when English troops, who had occupied the castle, took up the chase for Bonnie Prince Charlie but left an unattended fire, which soon spread.