Find traditional instrumental music
This is the stable version, checked on 28 April 2020.
Jump to: navigation, search

Back to Little Daisy

LITTLE DAISY. American, Reel (cut time). A Major. AEae tuning (fiddle). AABB. A moderately paced tune--slower than a reel, a bit faster than a march, as source Kingery played it; it was perhaps derived from a song. The tempo has increased somewhat since then, but still goes at a leisurely pace for a breakdown. 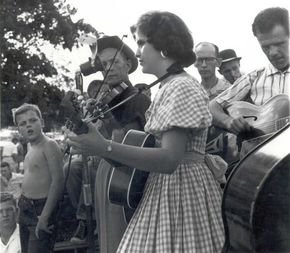 Additional notes
Source for notated version : - Pat Kingery [1] (1912-c. 1976, Nobob, Barren County, Kentucky). One of Barren County's most popular musical groups in the mid-twentieth century was The Kentuckians, who recorded some sides for the Goldenrod label [2]

Back to Little Daisy