Find traditional instrumental music
This is the stable version, checked on 29 March 2021.
Jump to: navigation, search

LITTLE OLD LOG CABIN (DOWN/IN THE LANE). AKA and see "Cabin Down the Lane." American, Song Tune. "Little Old Log Cabin Down the Lane" [1] was written and published in 1871 by a Louisville, Kentucky, riverman turned vaudeville songwriter, William Shakespeare "Will" Hayes, for the minstrel trade. It proved popular enough for Hayes to generate sequals in "Little Old Log Cabin in the Dell" (1875) and "Little Old Log Cabin by de Stream" (1880), similarly depicting the wistful elderly African-American protagonist as he contemplated his past contentment (i.e. in his slavery). It was recorded in October, 1925 for Edison by Fiddlin' Cowan Powers and Family, who had waxed an earlier version for Victor, in August, 1924 (although for that particular side the Victor company brought in Carson Robison to perform the vocal). However, the piece was first recorded and released in 1923, when Fiddlin' John Carson's (1868-1949, north Georgia) version became the second best-selling country music record for that year. Carson reportedly learned the song from "an old almanac" and was singing it at least as early as 1915[1], and, typically, Carson performed it while fiddling and singing at the same time. Yet another performance, Ernest Stoneman's, made the charts that decade, in 1926 when his recording of "Little Old Log Cabin" became the fifth best-selling country music record. Nor was Stoneman the only other early country artist to record the song: Uncle Dave Macon, Riley Puckett, Bradley Kincaid and others recorded it for various labels, and Carson himself re-recorded a version in 1934 for Bluebird Records under the title "I'm Old and Feeble"[2]. 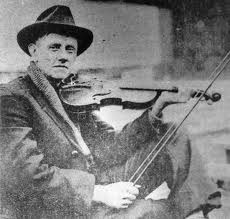 The song and its air were well-known in Great Britain in the latter 19th century, published by James S. Kerr in Merry Melodies vol. 4 in the 1880's as "Cabin Down the Lane."