Back to Little Thatched Cabin (1)

LITTLE THATCHED CABIN [1]. AKA and see "House in the Glen (2) (The)," "McDermott's Fancy." Irish, Double Jig. D Major. Standard tuning (fiddle). AABB'. Fiddler Paddy Reynolds, originally from County Longford, recorded the tune in New York in 1971 for Rego Irish Records when in his 50's, and at the height of his career. 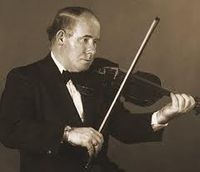 Back to Little Thatched Cabin (1)