Find traditional instrumental music
This is the stable version, checked on 2 February 2020.
Jump to: navigation, search

Back to Little Whiskey

LITTLE WHISKEY. American, Reel (cut time). USA, Missouri. A Major ('A' part) & A Mixolydian ('B' part). Standard or AEae tuning (fiddle). AABB. The tune is known as a "tie-hacker" tune, one that was carried to the Mid-West by railroad workers. In the case of "Little Whiskey" the source was Nile Wilson [1] (1912-2008) of Bucklin, Missouri, whose people formerly were 'tie-hackers' from Illinois. Wilson learned "Little Whiskey" from his great-uncle Charlie Davis, but many members of his family played: 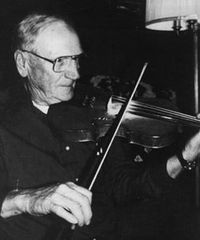 He acquired his interest in the violin and much of his repertoire from his fiddling grandfathers, Isaac Roby Wilson and Tom Davis, and from his father, William Randolph "Dolph" Wilson. As a child, Nile was surrounded by traditional violin players, from his brother Orley and his uncle Lester Wilson to his great uncle Charlie Davis and numerous neighbors and friends. His grandfather Davis sang songs while he played fiddle tunes. ... [Liner notes to "Now That's a Good Tune"].

Back to Little Whiskey