Find traditional instrumental music
This is the stable version, checked on 2 August 2021.
Jump to: navigation, search

LIZA JANE [2]. AKA and see "Little Liza Jane (1)," "Poor Liza Jane," "Tumblin' Creek Liza Jane," and "I Lost My Liza Jane." American, Reel (cut or 2/4 time). USA, northeastern Kentucky. A Major. Standard tuning (fiddle). AABB. This member of the large and varied "Liza Jane" family of tunes is often sourced to fiddler J.P Fraley[1] (1924-2011), of Rush, Kentucky, due to his influential 1972 LP recording, but it was in the repertory of several northeast Kentucky fiddlers. Fraley was born in 1927 near Hitchins, Carter County, and learned much of his fiddling and some repertoire from his father Richard, a farmer. Jeff Titon (2001) says that when the family had business in Ashland, Richard dropped J.P. off to listen for hours to regional great Ed Haley play on the street corner, so as to increase his tutelage. John Hartford supplies this note in his transcription: "Raymond Toddy and Howdy's Uncle Bob were playing a dance on Tumblin' Creek and swappin off, and Raymond played Liza Jane and ever since then they called it 'Tumblin' Creek Liza Jane.'" Titon (2001) finds the tune similar to "Jenny Get Around."

The title "Little Liza Jane" appears in a list of traditonal Ozarks Mountains fiddle tunes compiled by musicologist/folklorist Vance Randolph, published in 1954 (although the descriptor "little" may have been place in front of any of the "Liza Jane" [2] variants). 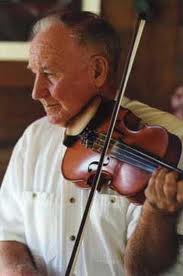