LOCH CARRON. Scottish, Pipe Reel. A Mixolydian. Standard tuning (fiddle). AABBCCDD. An early 20th century composition by David Charles "D.C." Mather (1868-1943), a London native (his father was invalided out of the Durham Light Infantry after being wounded in the Crimean War, while his mother was Irish) and graduate of the city's Royal Caledonian Asylum, thus later earning him the nickname “Cockney Piper.” Mather became one of the greatest professional Scottish Highland bagpipers, dancers and athletes of the 1890s. He was Piper to MacDonald of Lunga and later Lady Ann and Mr. Charles Murray of Lochcarron, and took numerous 1st prizes including Gold Medals in pibroch at Oban in 1891 and Inverness in 1894 and 1899. Emigrating to Canada in the first years of the 20th century, he almost immediately moved to the United States where he worked at the Anaconda Mines in Montana. He lived in Butte, Anaconda and Norris, dividing his time between working for the Anaconda Copper Co. and prospecting and mining with several partners. 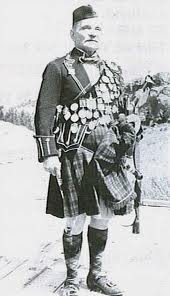 Four and six part versions of the tune exist in pipe repertory.