Back to Loch Glassie

LOCH GLASSIE. Scottish, Reel. D Major. Standard tuning (fiddle). AB. Paul Cranford suggests that this tune began as a variant of the better-known "Jenny Dang the Weaver (1)" due to similarity in some melodic material.

Loch Glassie is located near Weem, Perth and Kinross. The Celtic Monthly of 1901 (p. 218) reported: 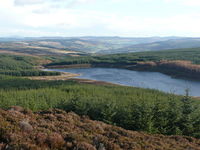 Local tradition accentuates the femininity of the locality of Weem. Below the cave with a spring in it, is a rockly fissure which is said to communicate with Loch Glassie, two miles away in the moor above. The story is that the lady of the district send her daughter and stepdaughter, or by another version, her two daughters and her step-daughter to seek a calf that had strayed into the rock. She protected her own child with a cross as a talisman (or a bible, other version), but during their wandering the child handed the talisman to the step-daughter. They followed the lowing of the calf until it led them to the cave into which the younger sister entered, but only re-appeared as a mangled body floating at the head of Loch Glassie. In the ballad describing the incident, the one who enters complains of being retained by "iron gates", and says that "the man of the red hood" is between her and returning. Compare this with the esoteric explanation of the incident of Lohengrin and the Venusberg, and other such phallic stories. Now, the Loch Glassie, in another legend of the near neighbourhood, is called Loch Lassie from a girl the only one saved of a party of children who had mounted a waterhorse which plunged with them into the loch, the little 'lassie' saved having fallen off in a fright.

Back to Loch Glassie