Find traditional instrumental music
This is the stable version, checked on 2 August 2022.
Jump to: navigation, search

Back to Loch Leven Castle 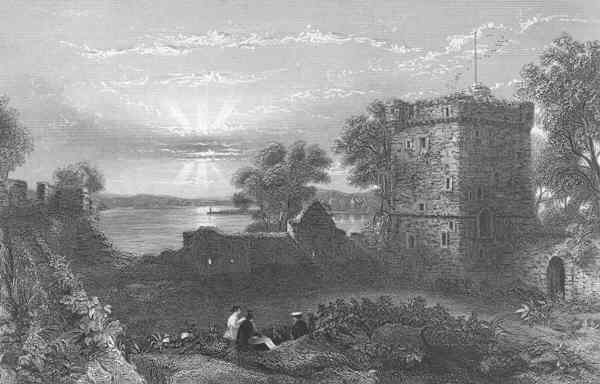 Loch Leven Castle [1], surrounded by a loch in Perth and Kinross, served as the site of an exciting 16th century drama involving Mary, Queen of Scots, who was imprisoned there for several months by Sir William Douglas, at the behest of the Earl of Moray, Regent of Scotland. The Douglas family was divided in their loyalty, however, and Sir William's younger brother George Douglas was a supporter of Mary (and for this had been banned from the castle), and himself had the support of many of the Scottish nobility. Mary had other sympathizers among the local populace and even in the castle itself, notably a sixteen year old boy named Willie Douglas who had become quite enamored of the Queen and became the hero of this story. Willie was a bold, adventurous and resourceful lad who had charge of the castle's boats. Word was brought to Mary by Sir William's unsuspecting wife, who innocently returned a token, an earring, and mentioned that her son George 'would ride to Glasgow the next evening;' this was the signal that Mary's escape had been planned for the next evening. Willie had planned a celebration for that day to include feasting and revelry, and even served Sir William at his table (he had the cunning to have planned the banquet in the hall whose window faced away from the loch and the escape route). He managed to slip the keys to the castle away from Sir William while he was distracted and went straight to Mary, who had evaded her chaperones and hid in an upstairs chamber. They stealthily made their way through the castle and out the great doors of the castle (which Willie locked behind him with Sir William's keys) to a boat waiting below and Mary and Willie were rowed to shore, but not before Willie disabled the rest of the boats and threw the castle keys into the loch's dark waters. Mary swiftly made her way to West Middrie Castle in Fife and safety.

The reel has been popular in County Donegal under the original title, and is played elsewhere on the island as a hornpipe, variously titled " Humors of Tuamgraney," "Humors of Tuamgreine," "Tuamgraney Castle," and "Tomgraney Castle (1)," while a Northumbrian version is called "Silver Street Lasses." The reel has been popularized by modern American Old-Time musicians, sourced to influential West Virginia old-time fiddler Franklin George, who also plays the Highland pipes and who has several British and Irish tunes in his fiddling repertoire. George learned the tune from a 78 RPM by the Honeyman Fiddlers, a cover name for the group The Cameron Men, who played it in a medley with "Loch Katrine" and "Miss Lyall." American spellings tend to be "Loch Lavan Castle." See also the similarly structured phrasing and similar melodic material of "Jerry Daly's Hornpipe (2)," "Bonaparte Crossing the Alps" and "Bonaparte Crossing the Rhine (2)."

Back to Loch Leven Castle