Find traditional instrumental music
This is the stable version, checked on 25 June 2022.
Jump to: navigation, search

LOCH LOMOND [1]. AKA - "Bonnie Banks o' Loch Lomond (The)," "Sláinte na nGaodhal," "Yellow is the Rose." AKA and see - Bonnie Banks o' Loch Lomond (The), Sláinte na nGaodhal, Red is the Rose. Scottish, Air. Apart from "Auld Lang Syne" it is the most famous and recognized Scottish melody ("Oh!, Ye'll tak' the high road and I'll tak' the low road..."). Although there allusions to older origins for the song, it apparently was first published in W. Christie's Traditional Ballad Airs (Edinburgh, 1881). Nevertheless, there are legends attached to the tune, one which has a Jacobite (sometimes un-named, sometimes identified as Donald McDonnell of Clan Keppoch) who, in 1746 and about to be executed for his role in the rising, said to his sweetheart (who had come from Scotland to say good-bye to him): "Ye'll take the high road, and I'll take the low road (i.e., the grave), and I'll be in Scotland afore ye." Some versions of the tale have McDonnell (or MacDonald) composing the song in Carlisle Castle, where he is imprisoned awaiting execution for his Moira who is safe in the highlands. After death, his spirit visits her a final time, and he makes love to her, though she can tell he is gone. A variant of the legend has two imprisoned Jacobites bidding farewell, one to be released to struggle home over the Highlands, one to be executed whose spirit will take the 'low road.' Lady John Scott and her husband are also supposed to have heard the piece sung by a boy in the street, and that it was she who popularized it about 1845. Fuld (1971) finds phrases in the tune similar to phrases in "Bonniest Lass in a' the World (1) (The)" (Thompson, Orpheus Caledonius, 1733) and "Robin Cushie" (MacGibbon, A Collection of Scots Tunes, 1742), but believes "Loch Lomond" sufficiently different to be considered a distinct song. 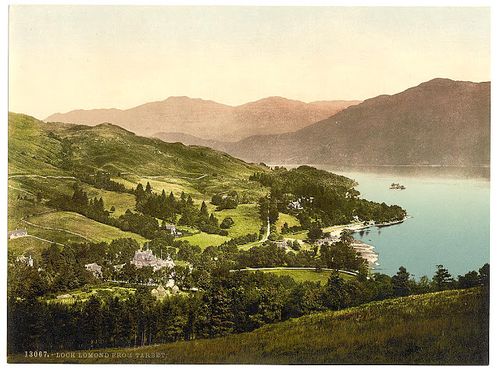 Chorus:
Oh ye'll tak' the high road
And I'll tak' the low road,
An' I'll be in Sctoland before ye',
But wae is my heart until we meet again
On the Bonnie, bonnie banks
O' Loch Lomond.

I mind where we parted
In yon shady glen
On the steep, steep side
O' Ben Lomon'
Where in purple hue
The highland hills we view
And the morn shines out
Frae the gloamin'

An' weel may I weep
For yestreen in my sleep
We stood bride and bridegroom together,
But his face and his breath
Were as cold as the death,
And his heart's blood ran red in the heather.

The wee bird may sing
An' the wild flowers spring;
An' in sunshine the waters are sleepin'
But the broken heart
It sees nae second spring,
And the world does na ken
How we're greetin'

In America it was in the repertory of Buffalo Valley, Pa., region dance fiddler Archie Miller. See also note for "Bonnie Banks o' Loch Lomond (The)" for more.