Find traditional instrumental music
This is the stable version, checked on 2 September 2021.
Jump to: navigation, search

Back to Lochaber No More

LOCHABER NO MORE (Cha Till Mor Mo Bhean). AKA and see "Lament for Limerick," "Limerick's Lamentation," "King James' March to Ireland," "Orange and Green (3)," "Sarsfield's Lamentation." AKA - "Cumha Baird air son a Leannain" (The Bard's Lament for his Sweetheart). Scottish, Slow Air or Lament (3/4 time). A Mixolydian (Boys of the Lough): G Mixloydian (Martin, O'Farrell): F Mixolydian (Mulhollan, Neil): A Dorian (Kerr). Standard tuning (fiddle). One part (Neil): AB (Mulhollan): AAB (Martin): AABB (Boys/Lough, Kerr, O'Farrell). "Lochaber No More" has been a favorite tune of Scottish pipers who use it as a funeral march or lament, though its origins may or may not have have been Irish. Captain Francis O'Neill (1913) reports that the last of the ancient Irish harpers at the Belfast Harp Festival of 1792 universally referred to one Myles O'Reilly as the composer of original "Lochaber." O'Reilly was born about 1636 in Killincarra, County Cavan. An air called "The Irish Tune," an early version of the melody, was printed in Thomas Duffet's New Poems, Songs, Prologues, and Epilogues, etc, published in 1676 (a copy of which O'Neill states can be found in the British Museum). It subsequently appeared in the Leyden Manuscript written for lyra-viol c. 1692 under the title "King James' March to Ireland" and in the Atkinson Manuscript (1694) as "King James' March to Dublin" (Sanger & Kinnaird, in their 1992 book Tree of Strings, say that the denotation 'march' is likely a commemorative title as the piece is in 3/4 time in these publications, even though organized marching to a 4/4 or 6/8 beat was not part of Scottish military usage until after this period). As an untitled piece it appears in the c. 1712 Skene Fiddle Manuscript. Sanger & Kinnaird believe that the military event the King James titles refer to is the expedition of James II from Kinsale to Dublin in March, 1689, which ties the melody to the titles by which it is known in Ireland, "Limerick's Lament/Limerick's Lamentation" and "Sarsfield's Lamentation", albeit with a key and mode change. Limerick was the scene of a long siege, and was captured in 1691 later in the conflict; Sarsfield was the commander of the Irish forces in the city. Samuel Bayard (in his article "A Miscellany of Tune Notes," Studies in Folklore, p. 171) finds a Welsh set under the title "Heiress of Montgomery (The)" in Edward Jones's Cambro-British Melodies (1820, p. 15, the third volume of his Relicks), "in a version very close to the old form 'King James's March to Ireland', of 1692." O'Neill prints the tune in his Waifs and Strays of Gaelic Melody (1922), copied from The Caledonian Muse (London, c. 1785, p. 20).

Neil (1991) relates: "It is on record that, in the old days, the playing of this nostalgic Gaelic air to the Highland regiments on active service abroad had such a profound adverse effect on the morale of the men, that eventually it had to be banned." A pipe setting of the tune appears in the Boys of the Lough book. Another setting was used as a vehicle for words by the Lowland Scots poet Allan Ramsay (b. 1696) entitled "Lochaber No More" ("Farewell to Lochaber, Farewell to My Jean"), a song from the Tea Table Miscellany (1714) that relates the feelings of a Highland soldier's leave-taking for active service abroad and the sense he will not return. It is in this spirit that the tune is sometimes heard at funerals, as, for example, when it was movingly played at the 1927 funeral of the great Scots fiddler/composer James Scott Skinner, by the noted bagpiper and composer G. S. McLennan (who was ill with cancer himself at the time, and who died later the same year). 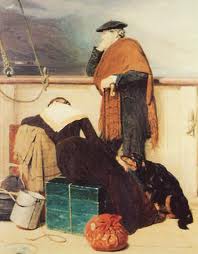 The poem appeared in Ramsey's Tea Table Miscellany of 1724, though the tune was not actually printed with the words until Thompson's Orpheus Caledonius in 1733. Sanger & Kinnaird point out that variants of the melody as a song tune seem to have been current in Scotland prior to 1724, "to an extent which makes it unlikely that they were derived from an Irish tune imported only around 1700" (1992, p. 109). Poet Robert Burns used a one-strain variant for his ballad "Lord Ronald, my son" which he said was "a favourite one in Ayrshire...evidently the original of 'Lochaber.'" "Locaber No More" was requested by Queen Victoria during her 1842 visit to Taymouth Castle for a recital by one of the most celebrated singers of Scots songs of the time, John Wilson. In the 1970's the song became a hit after it was recorded by the British group The Proclaimers.

A version of the tune appears in the large mid-19th century music manuscript collection of County Cork cleric and uilleann piper Canon James Goodman (vol. 3, p. 102) as "Orange and Green (3)," where it was identified as a 'minuet'. Goodman entered another version as "Lochaber" in vol. 4 (p. 100) of his manuscript collection.


Back to Lochaber No More