LOCHANSIDE [1]. Scottish, Retreat March (3/4 time). D Major. Standard tuning (fiddle). AABBCC. Composed by Pipe Major Angus MacDonald (1939-1999). MacDonald served in the Scots Guards for thirty years, with the rank of Pipe Major, and also spent several years as the personal piper to Queen Elizabeth II. He won numerous major piping awards, including the Clasp and the Gold Medal, both of which are sponsored by the Highland Society of London. 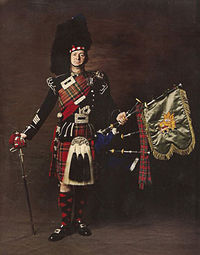 There is some question about how to notate the music. Retreat Marches, usually in 3/4 time, are often written with the bar-lines displaced one beat to the left. The downbeat then falls on the 2nd beat of the measure. Alternatively, the tune can be barred with the first two notes ('d' and 'e') as pick-up notes, before the bar. "The retreat march is not necessarily a march time tune which would be marched to," explains Stuart Eydmann; rather, "as often as not it was played as part of the evening ritual in military camps as day duties gave way to night ones. It was not linked to the military manoeuvre of retreating in or from battle but was linked to the idea of refuge and safety in the camp" [quoted in Martin, 1991].