LODGE OF GLEN-TANA, THE. AKA and see "Glentana." Scottish, Strathspey. F Sharp Minor. Standard tuning (fiddle). AAB. Composed by J. Scott Skinner [1] (1843-1927), first appearing in his Elgin Collection of 1884, the cost of its publication contributing to Skinner's bankruptcy a few years later.

Skinner reprised the tune in his Logie Collection of 1888 under the name "Glentana" ("It has been authoritatively settled that 'Glentana' is the proper spelling") and dedicated the tune to Lady Brooks. 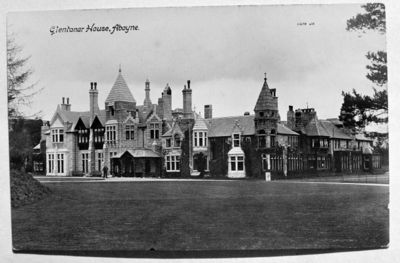 The lodge of of Glentana, or Glen Taner, was a sporting estate situated in the forest of Glen Tana, Aberdeenshire, near Aboyne in North East Scotland. A wealthy banker and philanthropist from Manschester, William Cunliffe Brooks, fell in love with it in 1869 and determined to make it his home and develop it into a earthy paradise, which he accomplished in grand style and maintained until his death in 1900. The first Lady Brooks was Jane Elizabeth Orrell, whom he married in 1842, and who died in 1865. A second wife was also named Jane, daughter of Lt. Col. Sir David Davidson, who had come with his family to live in a villa near to Glen Tana. There was a significant difference in their ages--Brooks was aged 59 and Jane was 27., and they were married in 1879.


See also listing at:
For a the complete story of William Cunliffe Brooks and Glentana, see Don Fox's blog [2]