LONDON MILITARY ASSOCIATION DANCE. English, Country Dance (whole time). D Major. Standard tuning (fiddle). AABB. The London Military Association was a volunteer militia that served to protect London, whose most prominent member was John Wilkes [1]. The militia saw action in the Gordon Riots of 1780, in which anti-Catholic rioters took over the city for a week, attacking the prisons and freeing the prisoners. Wilkes was in command of the troops outside the Bank of England when he ordered his men to fire on the crowd. 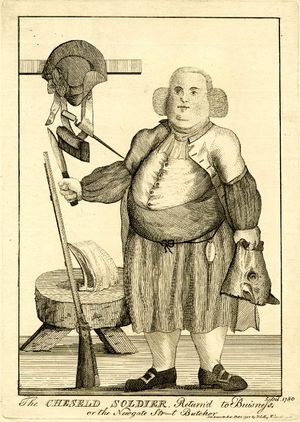 A period caricature of a volunteer of the London Military Association, a butcher by trade.