LONE STAR RAG [2]. Old-Time, Country Rag. A Major. Standard tuning (fiddle). ABB'. A different tune than "Lone Star Rag (1)," recorded in Chicago in March, 1949. The fiddler (he also played the clarinet) for the group at the time was Oathar "Art" Davis, who also played with Gene Autry and Tommy Allsup. The strapping Davis appears in a few 'B' westerns of the 1940's, occasionally acting bit parts as well as playing music. In the 1950's he fronted his own bands, notably Art Davis & the Rhythm Riders, who recorded several sides for the Bullet label. 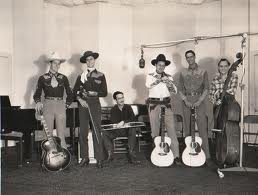