Long Room of Scarborough (The)

Back to Long Room of Scarborough (The)[edit]

LONG ROOM OF SCARBOROUGH, THE. AKA - "The Long Room," "New long room at Scarborough." AKA and see "Casks of Brandy," "Irish Hop Jig," "Miss Butler's Fancy." English, Irish; Slip Jig/Country Dance. England; Northumberland, Yorkshire. G Major. Standard tuning (fiddle). AABBCC. This English slip jig dating from the mid-18th century turns up in fiddler Martin Mulvihill's traditional Irish repertoire from the Bronx, NY, some 180 years later, probably via O'Neill's collection. The beginning of the 'C' part shares a couple of bars with "Foxhunter's Jig (1)," and the 'B' part is reminiscent of the same tune, although whether one or the other is ancestral is conjectural. Early printings of the melody appear in John Johnson's Choice Collection of 200 Favourite Country Dances, vol. 4 (1748, p. 89), David Rutherford's Compleat Collection of 200 of the Most Celebrated Country Dances (1756, p. 75), and James Aird's Selections of Scotch, English, Irish and Foreign Airs, vol. 1 (1782, p. 45). It also appears in the English music manuscripts of Northumberland musician William Vickers (1770-72, two strains, as "The Long Room at Scarbray"), Rev. Robert Harrison (Brampton, Cumbria, c. 1820), and Yorkshire fiddlers Lawrence Ledley (1827-1897, manuscript c. 1840's?) and Joshua Jackson (1763-1839). The 19th century Browne family manuscripts (Troutbeck, Cumbria) have the tune under the title "Boy in the Basket," and Peter Kennedy printed it (in two parts) as "Miss Butler's Fancy" at the end of the 20th century. 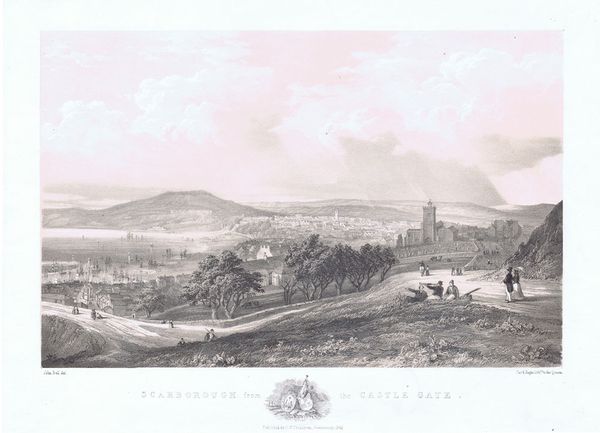 Scarborough, on the north east Yorkshire coast, has been a fashionable leisure resort for hundreds of years. The town's fame began in 1626 when Mrs. Tomyzin Farrer 'discovered' the medicinal properties of the town's waters. Work quickly spread and Scarborough became established as the first seaside spa resort, attracting many by its scenic views and the relief of aches and pains by 'taking the waters'. Scarborough catered to the elite's pleasures, with fashionable amenities such as nightly dancing and gaming tables to afternoon theater and horse racing on the beach sands. The Victorians further developed it by introducing some of the finest formal gardens in Britain, the renowned Scarborough Spa and the Esplanade. It remains a resort town today.

The 'long room' of the tune title refers to a large assembly hall constructed for dancing, one of the principle recreations of the leisure class in the 18th century. There were at least two long rooms in Scarborough, located in the old town, one on Sandside and the other in Princess Street (formerly called Low Westgate). There was also a Long Room on St. Nicholas Street that opened in 1725, with a commanding view of Scarborough Bay. It provided a venue for society balls, meetings and entertainment, and later added accommodations for visitors. It was renamed the Royal Hotel in 1839 and rebuilt in 1867; the latter structure continues in service as a hotel today.

Back to Long Room of Scarborough (The)[edit]