Back to Lonnie's Breakdown

LONNIE'S BREAKDOWN. Old-Time, Breakdown. USA, Missouri. D Major. Standard tuning (fiddle). AA'BB'. Recorded at home by Missouri fiddler Lonnie Robertson for private issue. Mark Wilson says the tune appears to be Robertson's own composition, "although it is patterned upon traditional pieces such as 'Johnny Get Your Gun' (as played by Earl Johnson)." 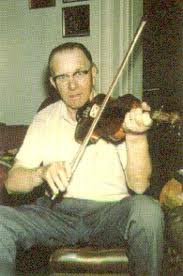 Back to Lonnie's Breakdown