LORD ALEXANDER RUSSELL'S JIG--WOBURN ABBEY. Scottish, Jig. C major. Standard. AAB. Composed by William Marshall (1748-1833). A Scottish fiddler and composer, Marshall is most famous for his many fine strathspeys. Marshall worked for much of his life for the Duke of Gordon as the Steward of his Household, and it is fortunate that the Duke was an enthusiastic supporter and patron of Marshall's music.

Woburn Abbey, Bedfordshire, has been the home of the Russell family, Dukes of Bedford, for over 450 years, and houses one of the finest private art collections in the world, the result of generations of collecting. The history of the house begins in the year 1145 when a religious house was begun for a group of Cistercian monks. The present north wing of the mansion is on the site of the monastic church and the present courtyard is on the site of the great cloister and garth. In 1538 the Abbot, Robert Hobbes, was found guilty of treason and the monastery confiscated. Legend states that he was hanged from an oak tree at the Abbey's gate. The Russells were granted Woburn Abbey in 1547 by Edward IV, although it did not become their residence until 1619 with the first Duke of Beford. The tune's namesake, Lord Alexander George Russell, was born on the 16th of December, 1821, at Woburn Abbey, the son of John Russell (1766-1839), the 6th Duke of Bedford, and his second wife, Lady Georgiana Gordon, the daughter of Alexander Gordon, the 4th Duke of Gordon, Marshall's employer. Marshall's jig commemorates the birth of the Duke's grandson. Lord Alexander Russell died in 1907, at Wood Eaton, Oxford. 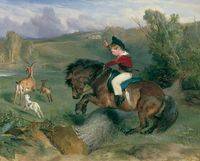 From Queen Victoria's journal of her trips to Balmoral, Scotland, Sept. 4, 1860:

We met Lord and Lady Alexander Russell at a small farmhouse, just as we rode out of the wood, and had some talk with them. They feel deeply the ruin of the place where they formerly lived, as it no longer belongs to them. We rode on for a good long distance, twelve miles, till we came to the ferry of the Spey. Deer were being driven in the woods, and we heard several shots. We saw fine ranges of hills on the Spey-side, or Strathspey, and opening to our left, those near Loch Laggan. We came to a wood of larch; from that upon cultivated land, with Kinrara towards our right, where the monument to the late Duke of Gordon is conspicuously seen on a hill, which was perfectly crimson with heather.

Before entering the larch wood, Lord Alexander Russell caught us up again in a little pony carriage, having to go the same way, and he was so good as to explain everything to us. He showed us "The Duke of Argyll's Stone" -- a cairn on the top of a hill to our right, celebrated, as seems most probable, from the Marquis of Argyll having halted there with his army.