Find traditional instrumental music
This is the stable version, checked on 16 March 2022.
Jump to: navigation, search

Back to Lord Duncan's Flag 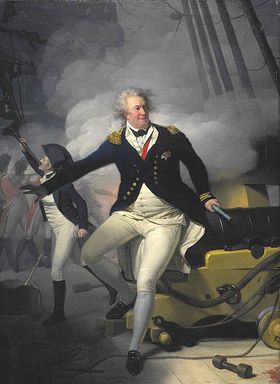 Composed by musician, composer, bandleader and publisher Nathaniel Gow in honor of Adam Duncan (1731-1804), Viscount Duncan [1] of Camperdown, a hero of the wars against the French and Dutch in the second half of the 18th century. Duncan was born in Lundie, Angus, Scotland, a second song of Alexander Duncan of Lundie, Provost of Dundee, and his wife Helen Haldane. He went to sea at age fourteen under the tutelage of his maternal uncle, Captain Robert Haldane, and by 1761 had command of his own ship. A fighting captain, Duncan was steadily promoted and, in 1787 attained flag rank, and by the mid-1790's he was Admiral of the Blue. His finest hour came in 1797 when on blockade of the Dutch fleet under Admiral De Winter. Taking advantage of the temporary departure of the English fleet to refit, De Winter ventured out into open sea. Returning, Duncan found him off the coast between the villages of Egmont and Camperdown. After a five hour battle De Winter was compelled to surrender and gave up his sword to Admiral Duncan aboard his flagship the Venerable, a victory considered among one of the most significant actions of the wooden ship navy. The title of Gow's tune perhaps references Duncan's rank, or perhaps an incident in the battle when the Venerable's main top gallant mast was shot away by the Dutch, and an English seaman named Crawford went aloft with another flag, hammer and nails, and fixed the flag to the topmast-head.

Back to Lord Duncan's Flag