Back to Lord Elphinstone's Strathspey (1)[edit]

LORD ELPHINSTON(E'S STRATHPSEY) [1]. Scottish, Strathspey. F Major (Glen): C Major (Kennedy). Standard tuning (fiddle). AB (Glen): AABBCCDD (Kennedy). The strathspey was composed by Duncan MacIntyre (c. 1767-c 1807), and appears in his Collection of Slow Airs, Reels & Strathspeys (1794). He was an expatriate Scots dancing master in London who spent some years in India (probably as a Master of Ceremonies to the Governor-General's Court), and who died about 1806 or 1807. 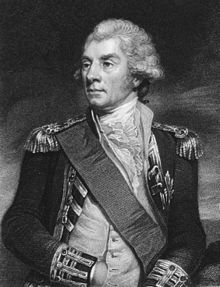 The title likely refers to George Keith Elphinstone [1], Viscount Keith of Elphinstone (1746-1823), born at Elphinstone Tower, near Stirling, and named after his great-uncle George Keith, last Earl Marischal. Elphinstone entered the navy in 1761, distinguishing himself in one engagement after another against the French. In 1794 he became a Knight of the Bath and a Rear Admiral; the next year he was promoted to Vice Admiral. Honors amassed: he eventually became Admiral of the Blue, then White and finally Red. He was Commander-in-Chief in the Mediterranean from 1799 to 1802, and Commander of the Channel Fleet in the later wars with Napoleon. Having received many decorations, on 1 June 1814 he was created Viscount Keith. On 10 March 1823 he died at Tullyllan, on the Firth of Forth, and was buried there.

The tune is not the "Lord Elphinston" that is an alternate name for "Drive Hakky," "Ca' Hawkie (Through the Water)."

Back to Lord Elphinstone's Strathspey (1)[edit]