Find traditional instrumental music
This is the stable version, checked on 4 July 2020.
Jump to: navigation, search

Back to Lord Foppington (1)

LORD FOPPINGTON [1]. English, Country Dance Tune (cut time). C Major. Standard tuning (fiddle). AAB. The tune with directions for a country dance first appears in print in John Playford's Dancing Master, 11th edition (1701, p. 273) as "Lord Phoppington." It was retained in the long-running Dancing Master series through the 16th edition of 1716, published at the time by John Young, heir to the Playford publishing concerns. Beginning with the 14th edition (through the 18th edition) of the Dancing Master a different tune with the alternate title "Lord Phoppington" and the main title of "Pilgrim (1) (The)" also appeared (for which see "Lord Foppington (2). The piece also appears, as "Lord Foppington," in rival London publisher John Walsh's The Compleat Country Dancing Master (London, 1718, p. 285), reprinted in 1735 and 1754. 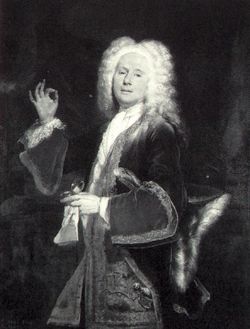 Lord Foppington was a character in the comic play The Relapse, Or, Virtue in Danger [1] (1696), by Sir John Vanbrugh [2] (1664-1726), closely based on actor and playwright Colley Cibber's (1671-1757) "Frenchified" character Sir Novelty Fashion, who had been introduced in his slightly earlier 1696 comedy Love's Last Shift, Or, Virtue Rewarded. Vanbrugh even copied Cibber's character's vanity, mannerisms, pratfalls and womanizing, and supposes that Sir Novelty purchased the the title of "Lord Foppington" through the corrupt system of Royal title sales. The plays were huge successes, helped in part by Cibber's performance in both as Lord Foppington.

Not only was Vanbrugh a popular and accomplished playwright, but he was a renowned architect who designed the magnificent Blenheim Palace and Castle Howard, and who is credited with founding the English Baroque style.

Back to Lord Foppington (1)