Back to Lord Kirkcudbright

LORD KIRKCUDBRIGHT. Scottish, Air (3/4 time). D Major. Standard tuning (fiddle). AAB. Sholto Henry MacLellan (1771-1827) was eighth Baron Kirkcudbright during Nathaniel Gow's time, having succeeded to the title in 1801. He married Mary Cantes in 1820, although the couple remained childless. Sholto served for a time in the foot guards, but seems to have spent most of his time in England (he died at Southampton). His obituary reads, in part: "He was short in stature and somewhat deformed in person. With some eccentricities, he possessed many good qualities. He is succeeded by his only brother" (also an officer in the foot guards). 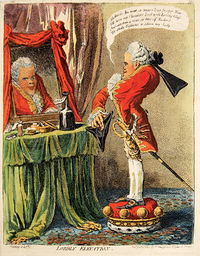 Back to Lord Kirkcudbright