Back to Lord Lovat Beheaded[edit]

LORD LOVAT BEHEADED (Mac Shimi mor a basachadh). Scottish, Slow Air (4/4 time). A Dorian. Standard tuning (fiddle). AAB. Captain Simon Fraser notes: "The name of this melody bespeaks what gave occasion to it. It is the production of the famous poet, Alexander MacDonell, who is never at a loss in addressing the feelings, and who says he would for ever regard Lord Lovat's death as murder, having been tried merely by his enemies." Fraser refers to his namesake Simon Fraser [1], 11th Lord Lovat (1667-1747), described as 'the Fox' and 'the most devious man in Scotland' during his time. His lifelong home was at Castle Downie, where he kept a number of retainers who shared their Laird's table, but in a strict pecking order with the head of the table drinking the better clarets, with whiskey relegated to those 'below the salt.' Lovat's life was long and eventful, characterized by his ambition, some say obsession, of gaining the title of Lord Lovat for himself. To this end he employed any means possible, including dishonest and criminal acts, notably as his scheme of kidnapping and marrying the widowed Amelia, Lady Lovat, in order to gain the title. Fraser's henchmen succeeded in getting her to church where a marriage service was performed-under duress, as Simon's retainers slit the Lady's stays with their dirks while his pipers played to drown out her screams. The Lady, however, was by birth a member of the powerful clansmen at Atholl, who soon drove Fraser out of the country. Amelia had the marriage annulled and quickly remarried in 1702, but Simon kept legal battles raging for decades. 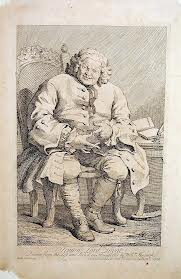 In France Lovat converted to Catholicism and ingratiated himself with the Jacobite cause, returning to Scotland in 1703, to resume his scheming and maneuvering. During the rising of 1715 Lovat managed to avoid taking sides, trying to placate both, eventually turning against the Jacobites when the tide turned (and helping himself in the process to the lands of defeated sympathizers). In 1733 Simon finally prevailed in his legal wrangling and, having ingratiated himself with the ruling Hanovers in London, he won the title of Lord Lovat. Despite this he still flirted with the Jacobite cause, aiding John Roy Stewart to escape the country in 1736. When Bonnie Prince Charlie rose in 1745 Lovat again tried to hedge his bets, but this time he was forced to more demonstrably support the Jacobites, although when he heard of their defeat at Culloden he said 'none but a mad fool would have fought that day.' Lovat and the Prince met the night after the battle at Lovat's house of Gorthlech on Loch Mhor, both fleeing the next day; Charlie eventually to France, and Lovat to an island on Lake Morar. He was captured there by Captain Ferguson, trying to hide in a hollow tree but given away by his uncovered bare legs. 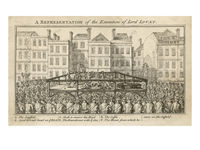 Lovat, old and infirm, was taken to London in a litter and was imprisoned in the tower until March, 1747, when he was tried at Westminster Hall. Undoubtedly knowing the end result, he managed to keep his dignity, sitting for a portrait by Hogarth and uttering famous bon mots during the proceedings. He was soon convicted and a month later was beheaded, on Tower Hill, the last person to be so in Britain. In a final irony, one of the wooden grandstands erected for the mob to witness the execution collapsed, and several Londoners preceded Lovat to death.

Back to Lord Lovat Beheaded[edit]