Find traditional instrumental music
This is the stable version, checked on 30 April 2021.
Jump to: navigation, search

Back to Lord Lyndoch

LORD LYNDOCH. AKA - "Lord Lynedoch." Scottish; Strathspey, Highland Fling or Highland Schottische (whole time). D Major. Standard tuning (fiddle). AAB (most versions): AABB (Cranford/Fitzgerald). Composed by P(eter) Agnew, Perthshire. A county Donegal, Ireland, variant goes by the title "Cailíní Ard a' Ratha." Thomas Graham, Lord Lyndoch (1748-1843) was a hero in the Peninsular War, the "Hero of Barossa," fought near Cadiz, 1811, when Graham managed to attack the rear of the French army. Later he fought in the Netherlands, less successfully. He was created Baron Lynedoch of Balgowan in 1814. Graham remained in good health into old age; at 74 he rode 24 miles to the Pytchley meet, and that same year acted as second to the Duke of Bedford in his duel with the Duke of Buckingham. 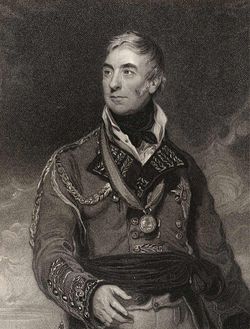 Robert Ford, in his Harp of Perthshire: A Collection of Songs, Ballads, and other poetical pieces (1893) gave this sketch of the composer in his section of "Biographical Notices of Perthshire Poets":

A house-painter to trade, and a poet by chance, Peter Agnew was a native of Perth, and lived in the South Street in 1793. Very early in life he gave evidence of being possessed of rare musical talent, and learned to play on the violin, an instrument over which he soon obtained an almost complete mastery, and with which he lived to charm the ills of many a luckless day. On the completion of his 'prentice time Agnew went to Glasgow, and from thence, in a few years, to London, from whence he again, after a few more years, returned to the commercial capital of his native Caledonia, where he wore out the bulk of his after-lease. His life appears to have been a somewhat chequered one, the grim visage of poverty frequently staring him in the face, and, if not actually sconcing herself at his fireside, being represented there on an occasion by her foster-friend, the beagle. An excellent violinist, a fair landscape painter, a capital singer of songs, a pleasing writer of verses, and an entertaining story-teller, perhaps Peter Agnew had too many accomplishments to be eminently successful in any.

Back to Lord Lyndoch