Back to Lord Paget's Waltz[edit]

LORD PAGET'S (WALTZ). English, Waltz. A Major. Standard tuning (fiddle). AABBCCDDAABB. Lord Henry Paget [1] (1768-1854), Lord Paget and (from 1812-1815) The Earl of Uxbridge, won a Napoleonic-era victory over French cavalry at Sahagun, Spain, in December, 1808, during the Peninsular War. Paget was called the most gifted British cavalry commander of the war, however, soon after the war in Spain he returned home to England, not being allowed to serve in the same theater as Wellesley (later Lord Wellington), as Paget had an affair with the British commander's sister-in-law (then the wife of Henry Wellesley), and thus was not a welcome comrade-in-arms. The cavalryman and his paramour, Lady Charlotte Cadogan, both obtained divorces from the respective spouses, and married at the end of 1810. Paget did serve with (a wary) Lord Wellington at Waterloo in 1815, as cavalry commander in Belgium, and again served with distinction, leading a charge of heavy cavalry against d'Erlon's column, although he sacrificed a leg at the end of the great battle after it was shattered by grapeshot.

Paget comforted by Lord Wellington after the loss of his leg.

The amputated leg was buried in the village of Waterloo, where he was operated on in the home of a man named Paris. The burial site, complete with 'tombstone', became a tourist attraction in the decades following the battle, although by the late 1870's, Mr. Paris's descendents displayed the unearthed bones. When Paget's son visited the site he became outraged at the display and demanded the bones be given to him for proper burial. The Paris family offered to sell the bones to the son, enraging him further, and the episode threatened to become a diplomatic incident until the Belgian Minister of Justice intervened and ordered the bones to be reburied. They were not, however, and only kept hidden until, in 1934, the last male descendent of M. Paris died. His widow found the bones in the study, along with documentation of their origin, and she wisely chose to incinerate them in a furnace. 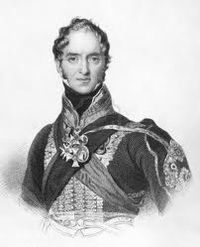 Back to Lord Paget's Waltz[edit]