Back to Lord Saltoun

LORD SALTOUN. AKA - "Lord Saulton's," "Lord Saltoun's Reel." Scottish, Reel (whole time). A Major. Standard tuning (fiddle). AB. The Lords of Saltoun were the Frasers of Philorth, members of the large Fraser clan whose family seat is in Fraserburgh, Aberdeenshire at Cairnbulg Castle. Interestingly, the castle, which dates from the 15th century, sold by the 10th Lord of Saltoun in 1666 and by the 19th century it was in ruins. Restored in 1896, it was bought back by the 19th Lord Saltoun in 1915. 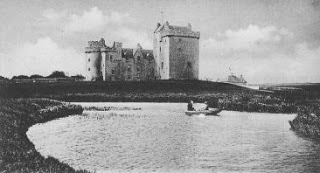 The Saltouns took no part in the Jacobite risings. The 16th Lord Saltoun commanded the Light Companies of the First Guards in the Orchard at Hougoumont on the morning of the Battle of Waterloo in 1815.

It is a Lord Saltoun who is rejected by young Jeannie in the famous Scots ballad "Annachie Gordon." The heroine loves Annachie and adamantly refuses to wed another, despite her father's pressure:

Down came her father and he's standing on the floor,
Saying, Jeannie, you're trying the tricks of a whore;
You care nothing for a man who cares so very much for thee,
You must marry with Lord Saltoun and leave young Annachie.
For Annachie Gordon, he's only but a man,
And although he may be pretty, but where are all his lands;
Saltoun's lands are broad and his towers they stand high,
You must marry with Lord Saltoun and forget young Annachie.

The wedding goes on as planned despite Jeannie's wishes, and predictably ends with Jeannie's death:

The Canadian group George Wade & His Cornhuskers recorded the tune with a dance caller as the first change in a square dance in the 1930's.

Back to Lord Saltoun