LORGADÁN, THE. AKA - "Luachrachán (The)," "Looharadhawn's Jig (The)," "Lúradán's Jig." Irish, Jig. D Major. Standard tuning (fiddle). AABB. The tune is often credited to Junior Crehan (1908-1998), a fiddler, concertina player, composer, singer, and storyteller who lived in Mullagh, Co. Clare, originally from Ballynakea, near Quilty, Co. Clare. Although some in the family attribute it to Junior, his grandson Kevin Crehan believes Junior had the tune from his mentor, Sculley Casey. 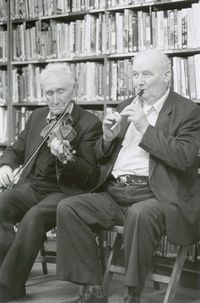 Junior himself claimed other origins for the tune, and told the tale that he and a friend, up late at night, conceived to try to capture one of the wee folk, called a Luathradain (various spellings, but referring to a creature akin to a leprechaun). They raked ashes over the coals of the fire, knowing the the creatures sought entry into the household via this route, and lay in wait. Sure enough! one came down through the hearth, to be seized by the ambushers who then demanded his gold for his freedom. The luthradian pleaded that he had none of precious metal, and on consideration, Crehan and his mate decided to settle for a tune. Each of the men memorized a strain of the tune, later putting them together.