Find traditional instrumental music
This is the stable version, checked on 17 January 2021.
Jump to: navigation, search 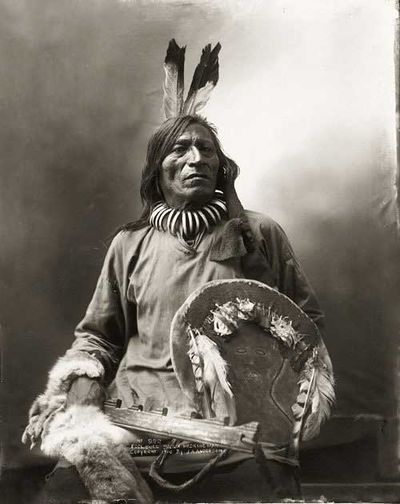 LOST INDIAN [1], THE. American, Reel (cut time). USA, Oklahoma, Texas, eastern Kentucky, West Virginia. A Major. AEac# tuning (fiddle). AABB (Thede), AABBC (Brody): AABBAACC'BB (Eck Robertson). Guthrie Meade and Mark Wilson (1976) point out that, among older traditional fiddlers, "Lost Indian" is a generic title for a number of tunes related not so much by melodic content as by the fact that they are characteristically played in scordatura (AEac#) tuning. Charles Wolfe, reiterating Wilson and Meade's line of thinking, confirms that the "Lost Indian" tunes are a family of fiddle tunes popular from Virginia to Texas, "more associated with tuning AEac# than with melodic contours" (1982, p. 3-12). The popular old-time/bluegrass flatpick guitar showpiece "Black Mountain Rag" is also in this family (Charles Wolfe, The Devil's Box, Dec. ?), thought by some to be a derivative of "Lost Indian (1)." Fiddlers, perhaps inspired by the title, would sometimes let fly a vocal 'whoop' when playing the tune, to represent a Native-American lost in the wilderness. At other times, as in Kentucky fiddler Ed Hayley's (1885-1951) version, melodic and rhythmic features of the tune are similarly said to represent "an Indian squalling in the wilderness." A melody under the "Lost Indian" title was mentioned in a 1931 account of a LaFollette, northeast Tennessee fiddlers' contest as having been a common tune played by the assembled group. The title is a notorious "floater," though, and exactly which of the many different tunes and versions of "Lost Indian" was played by the Tennessee fiddlers in LaFollette is unknown. Moving to the American south midwest and southwest regions, a tune with this title appears in a list of traditional Ozark Mountain fiddle tunes compiled by musicologist/folklorist Vance Randolph, published in 1954, and is perhaps related to the version Marion Thede collected from Oklahoma fiddler Max Collins. "Lost Indian" was also the repertoire of fiddler Louis Propps (Texas, 1936). See also the related "Cherokee Shuffle."