Find traditional instrumental music
This is the stable version, checked on 13 April 2021.
Jump to: navigation, search

LOST INDIAN [2]. AKA and see "Gone Indian." American, Reel (cut time). A Major. Standard tuning or AEac# (fiddle). One part (Devil's Box): AA'BB'CC' (Beisswenger & McCann). It was customary to vocalize a holler or yelp with the two held notes in this tune, in imitation of an Indian 'whoop'. Bob Holt told Mark Wilson that when John Wills (a champion fiddler and struggling cotton farmer from Texas) played the tune and yelped, "it just about curled your hair." Wills, the father of renowned western swing fiddler Bob Wills, played in the radio as a guest with his son's band, and also broadcast on his own. 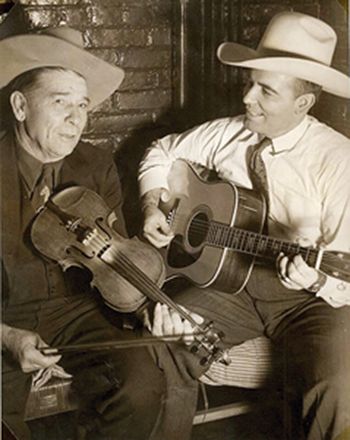 John Wills with son Bob, c. mid-1940's
The tune was sometimes referred to as "Gone Indian," but Bob Will's "Gone Indian" has little direct resemblance to his father's "Lost Indian [2]."