LOUIS CYR. AKA - "Reel de Louis Cyr." French-Canadian, Reel. G Major. Standard tuning (fiddle). AABB. Composed by Jean-Claude Mirandette in memory of Louis Cyr [1] (1863-1912), who was reputedly the strongest man who ever lived (at least in modern times). Cyr was born in Saint-Cyprien-de-Napierville, Québec, Canada, but and worked as a lumberjack and on the family farm. As a young man Cyr lived in Lowell, Mass., where he gained a reputation as a strong man and contest champion. He went on various tours, interspersed with a two-years stint as a police officer in Montreal. His accomplishments of strength include lifting a platform with 18 men on it, and restraining two teams of two horses, one team in each hand. While some of his reputed feats are surely exaggerated, there are numerous well-recorded events attesting to his prowess. 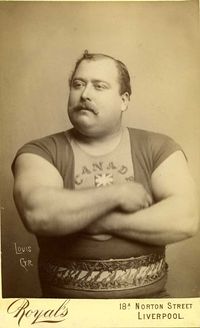