Back to Louisburg Blues 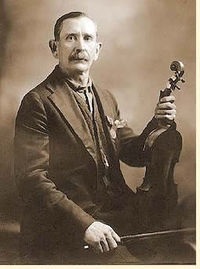 The core of the tune is a rhythmic country blues, sandwiched between an a-rhythmic slower blues drawl that is much like an air. The record company may be responsible for the tile on his recording. It may be that Stephens called the tune "Louisville"--the site of the regional finals for Henry Ford's old fiddler's competition, held at the Brown Theatre in Louisville, Kentucky, on January 20, 1926, or perhaps it was named for the town of Lewisburg, Kentucky, in Marshall County (adjacent to Stephen's home county, Bedford County).

Back to Louisburg Blues