Back to Lovat Scouts (The)

The Lovat Scouts [2] were a British military unit formed for the Boer War at the end of the 19th century, who also saw service in World War I in France, at Gallipoli, and in Egypt and Macedonia. They formed the first sharpshooter unit of the British army, and were the first to employ the 'ghille suit' for camouflage. 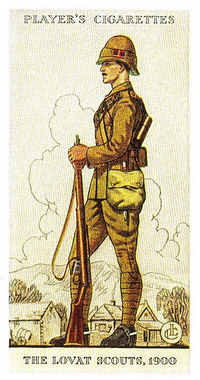 Back to Lovat Scouts (The)