LOVE AND A BOTTLE [2]. English, Country Dance Tune (6/8 time). G Dorian/Minor. Standard tuning (fiddle). AABB. The tune dates to 1710 when it was published in Walsh & Randall's New Country Dancing Master, 2nd Book (London, 1710), a volume republished by Walsh & Hare in 1719 as The Second Book of the Compleat Country Dancing-Master. Graham Christian (2015) also notes the tune was used by Walsh in 1710 for "Cuckold's Point" and for John Young's Dancing Master volumes of 1718 and 1728, where it is given as "French Peasant, and the Jigg" (which also appears in John Walsh the Younger's 1760 collection). Thomas D'Urfey used the tune in his ballad opera Love in a Riddle (1729), reworked that same year as Damon and Phyllida. 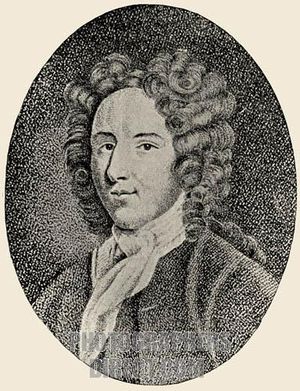 Farquhar's first comedy, Love and a Bottle, was premiered in 1698; "for its sprightly Dialogue and busy Scenes," it is said to have been "well received by the Audience." Called a "licentious piece" by one scholar, and cited as proof that Farquhar had "absorbed the stock topics, character-types, and situations of Restoration comedy" by another, the play deals with Roebuck, "An Irish Gentleman of a wild roving Temper" who is "newly come to London." The general character of the play can be evaluated by considering that in the opening scene, Roebuck tells his friend Lovewell that he has left Ireland due to getting a woman pregnant with twins (a boy and a girl) and to Roebuck's father trying to force Roebuck to marry the woman; however, Roebuck remarks, "Heav'n was pleas'd to lessen my Affliction, by taking away the She-brat."

If you would understand [Farquhar's] plays, you must perforce know something of his life. Born at Londonderry in 1677, he went, in 1694, to Trinity college, Dublin, composed a Pindaric ode at fourteen, and, though intended for the church, found his way easily to the stage. To be an actor was his earliest ambition, and he appeared at the Smock Alley Theatre in the part of Othello. The discomfiture caused him by stage-fright was greatly enhanced by an accidental wound which he inflicted on a fellow-player, and he gladly took the advice of Robert Wilks, who remained his lifelong friend, and who played the chief part in all his plays save one, to write a comedy. So it was that, in 1698, he came to London with Love and a Bottle in his pocket, and made an instant conquest of the theatre. The comedy, which has little to commend it save a vivid sense of life and movement, is, doubtless, autobiographical. Farquhar himself must have sat for Roebuck, the young Irishman freshly arrived in town, and it is easy to believe that the artifice wherewith Lyrick, the dishevelled poet, escaped his creditors, was part of Farquhar’s own experience. The dramatist, in brief, whose youth would excuse grosser absurdities than are here exhibited, displays more energy than skill. His comedy is crude and filled with crudities, but a bluff sincerity shines through it all, and it is not surprising that an audience, accustomed to disguises as the traditional trappings of the stage, should have received it with favour.


See also listing at:
See the dance and hear the tune on youtube [2]