LOVE IN A TUB [1]. English, Country Dance Tune (cut time). D Major. Standard tuning (fiddle). AABB. The play Love in a Tub was over a century old at the time of the tune's appearance in Longman & Co's country dance publication in 1770. It's full title was The Comical Revenge; or, Love in a Tub, and was a comedy by Sir George Etherege--his first play--acted at Lincoln's Inn Fields in 1664. It was written partly in prose and partly in rhyme, and was successful enough to be revived periodically through the 18th century. The title comes from a second plot or subplot, in which a servent, Dufoy, speaking in a nearly unintelligible French accent looks pale and wan, supposedly out of love for Betty, a waiting woman, but really from the effects of verenrial disease. Betty discovers he is only pretending to love her and locks him up in a washtub. Despite this, at the end of the play it appears that Dufoy and Betty will be married. 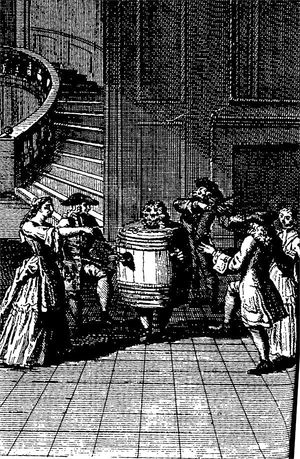 Scene from Love in a Tub