Find traditional instrumental music
This is the stable version, checked on 15 March 2021.
Jump to: navigation, search

LOVE IN A VILLAGE [1]. AKA and see "New Bath Whim," "Spell (The)," "Trip to Bedford House." English, Reel (4/4 time). C Major (Harding, Vickers): D Major (Rook). Standard tuning (fiddle). AABB. The title "Love in a Village" may have derived from a popular 1762 comic opera of the same name [1] by Thomas A. Arne and Isaac Bickerstaff (1735-1812), which has been called "the most popular comic opera of the eighteenth century." It was also the first of its kind--a play with music--although in the 18th century the term 'comic opera' was not often distinguished from 'ballad opera', notes Peter A. Tasch [1]. The comedy center around two individuals betrothed by their families to people they've never met. Unknown to each other, they separately run away and land as servants in the same household...whereby they fall in love. At the end it is revealed that they actually were betrothed to one another in the first place. 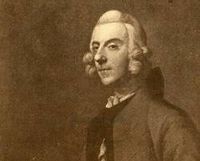 Comic opera had its origin at Covent Garden in December 1762 with Bickerstaff's 'Love in a Village', which, in spite of the fact that it presented a patchwork plot set to patchwork music, attained a success and a longsustained popularity unequalled save the 'The Beggars Opera'.[2] 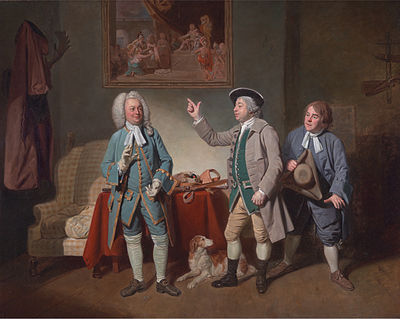 Tenor John Beard (ctr.) as Farmer Hawthorn in 'Love in a Village', by Johann Zoffany, 1767

There were forty-two songs in Love in a Village, five written specifically for the opera by Arne. Samuel Howard (1710-1782) contributed two. The remaining music was compiled from previously written works by fourteen composers, including Arne. The melody may have predated Arne's opera for there are cognate English dance tunes printed within the same decade called "New Bath Whim" in John Johnson's Twenty Four Country Dances for the Year 1765 (London), and "Trip to Bedford House" in Twenty Four Country Dances for the Year 1766 (London: R. Bride). In Scotland, Robert Bremner, Neil Stewart and the Gows published the tune as "Spell (The)." Under the title "Love in a Village [1]" the tune appears in American musician Henry Beck's German flute MS of 1786, in Cumbrian musician John Rook's 1840 copybook collection, and in Northumbrian musician William Vickers' 1770 music manuscript collection [2]. Various dances to set to the tune appear in American copybooks of the late 18th century; a similar one was entered into both Nancy Shepley's (Pepperell, Mass., c. 1795) and Asa Willcox's (Hartford County, Conn., 1793) manuscripts, while a different dance is contained in the publication Gentleman's and Lady's Companion (Norwich, Conn., 1798).