LOYAL EDINBURGH SPEARMEN'S MARCH, THE. Scottish, March. B Flat Major. Standard tuning (fiddle). AABB. John Pringle's second collection is dated by the inclusion of this tune. The corps of Loyal Edinburgh Spearmen was one of the many volunteer companies raised in Scotland after the French Revolution, in fear and anticipation of an invasion of Britain. It was incorporated in 1805 with a surgeon, Mr. John Bennet [1], appointed its original Lieutenant Colonel the year before. However, Bennet hardly had a chance to exercise command when he was killed in a hunting accident in October, 1805, and was replaced by Mr. William Inglis. Far from fighting the French, the volunteer Spearmen instead seemed to have been employed to quell public riots, although like other Volunteer units, they supplied officers for the militia and army. The Earl of Moira, Commander in Chief, gave the troop its colors when he addressed them in Heriot's Hospital Green. The Spearmen later became the Royal Edinburgh Volunteers. 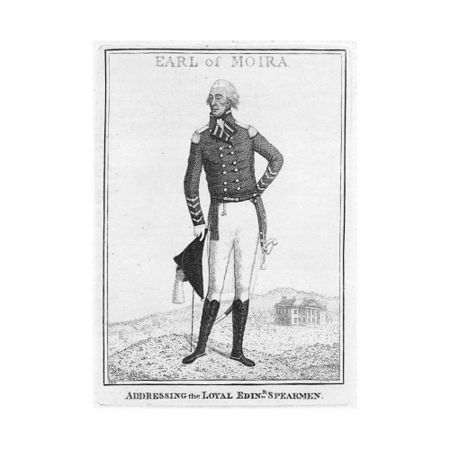 The Earl of Moira addressing the Loyal Edinburgh Spearmen