Find traditional instrumental music
This is the stable version, checked on 7 September 2022.
Jump to: navigation, search

LUAITHREADAN'S JIG. AKA - "Junior Crehan's Jig," "Looharadhawn's Jig (The)," "Lurgadán Jig," "Luachrachán Jig." AKA and see "Dermot Grogan's Jig (2)]," "Tony Smith's Jig." Irish, Jig (6/8 time). D Major. Standard tuning (fiddle). AABB. Numerous and varied spellings of the title circulate. The tune was in the repertoire of Mullagh, County Clare, fiddler Junior Crehan [1] (1908-1998), a member of the famed Laichtín Naofa Céilí Band. Although some in the family attribute it to Junior, his grandson Kevin Crehan believes Junior had the tune from his mentor, Sculley Casey. The story, although, is that the tune came directly from a luathradawn, a leprechaun-type character (a fairy or a small hump-backed man). Crehan had noticed that objects in his house were missing or rearranged, and finally saw small footprints in the ash beside the fireplace. He resolved with his son Pat to catch the culprit, suspecting it was one of the wee folk and knowing that whomever captures one of the creatures can ransom him for his pot of gold. He and Pat hid one night behind the dresser beside the fireplace, and, lo and behold, the luathradawn emerged from the chimney and began to roam about. Junior and Pat banged the dresser over the fireplace and caught the wee creature. When they demanded his riches however, the luathradawn claimed to be as devoid of precious metal as they were; he did however, notice a fiddle hanging on the wall, and suggested that a suitable ransom would be that he would teach them a special fairy tune, hitherto unknown by humans. He also would give them advice, which if followed would leave them never in need. After memorizing the tune Junior and Pat released their captive, and Junior penned the following verse: 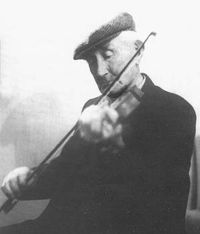 As I sat by the fire with my son Paidin
A sudden change came over the scene
Down the chimney came a little man so old,
And I asked him for the Crock of Gold;
"No gold I have but good advice
And if you heed it you will be wise-
Grow small barley and keep a pig,
And play this tune 'The Luathradawn's Jig'"!