Find traditional instrumental music
This is the stable version, checked on 11 July 2020.
Jump to: navigation, search

Back to Lucy Campbell (4)

LUCY CAMPBELL [4]. AKA and see "Miss Lucy Campbell," "Reel of Bervie." Canadian, Strathspey. Canada, Cape Breton. A Major/Mixolydian: F Major (Mount). Standard or ADae tuning (fiddle). ABCD (Dunlay & Greenberg): AABBCCDD (Sing Out). The tune is played as a four part tune in the key of 'A' (with a modal flavor) in Cape Breton, but is derived from Niel Gow's (1727-1807) six part strathspey ("Miss Lucy Campbell") in D Major. Dunlay & Greenberg (1996) state that "Pudding Maggie," a Scottish strathspey, is the source of the first and third turns of the Cape Breton versions. The melody appears as "Lady Lucy Campbell's Strathspey," set in the key of 'F', in the music manuscripts of William Sydney Mount, a renowned American painter and fiddler from Setauket, Long Island, probably transcribed in the 1840's. Cape Breton fiddle strathspey settings are very similar to that printed by piper William Ross in his 1885 collection (as "Miss Lucy Campbell's Strathspey"), as Dunlay and Greenberg (1996) point out. Ross (1823-1891) was a Pipe Major in the Black Watch from 1849 to 1854, but then served as the Queen's Piper for some 35 years, until his death. 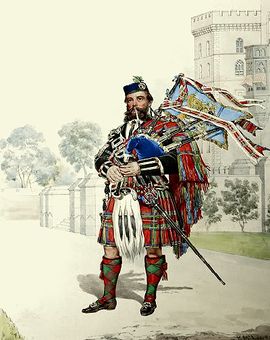 William Ross
"Reel of Bervie" (Càrn Bran), from William Gunn's Caledonian Repository of Music Adapted for the Bagpipes (Glasgow, 1848), is a cognate melody in two strains. See also the cognate first strains of "Puck's Scotch Reel" and "Connaught Reel (4) (A)."

Back to Lucy Campbell (4)