Back to MacLeod of Mull[edit] 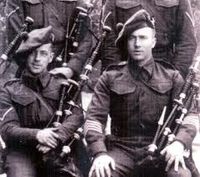 ...born in Stornoway, on Lewis, in the Scottish Hebridean Islands in 1916. He became a piper for the Seaforth Highlanders in 1937, reaching the level of pipe major after only four years. He served in France in World War II, and was taken prisoner by the Germans at St. Valery, escaped during a forced march and managed to return to the UK. In 1945, he piped his battalion across the Rhine during an assault crossing -- even though he had been forbidden to do this by his commanding officer.

During his army career, he was highly successful in piping competitions, winning numerous medals. MacLeod retired from the army in 1963 and from competition in 1966, but neither marked the completion of his piping career. He continued to give recitals in Scotland and around the world, and he provided instruction to many pipers at all levels of ability. He was awarded the Membership of the Most Excellent Order of the British Empire in 1978 for outstanding service to piping.

The tune was in the repertory of Donegal fiddler Danny O'Donnell as an untitled jig (see "Piping Jig").

Back to MacLeod of Mull[edit]