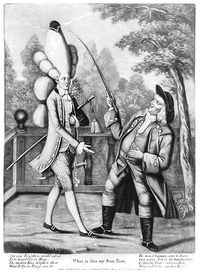 Macaroni fashions were imported from Italy and France, as the name suggests, and Macaroni wigs became an extreme fashion in the 1770's. Macaroni's not only dressed in a foppish manner, they adopted feminine mannerisms, and the men were deemed 'effeminate.'


Recorded sources: The earliest sound recording of the tune is on the 2nd Barrel, 2nd tune, of a mechanical Chamber Barrel Organ [1], hand-built by John Langshaw (1718-1798), Organ Maker, Lancaster, c. 1785. The organ is one of three surviving Langshaw organs.