Back to Macedonian Hornpipe (The)

MACEDONIAN HORNPIPE, THE. American, Hornpipe. G Major. Standard tuning (fiddle). AABB. Composed by Charles P.F. O'Hara, who published a collection of tunes in New York in 1813. Although primarily consisting of traditional Irish melodies there were several tunes composed by O'Hara himself, with titles having to do with American victories in the War of 1812 and American politicians. 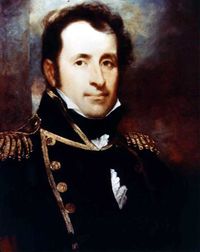 The capture of the frigate HMS Macedonian by the American frigate United States [1] in October, 1812, was met with jubilation and a heightened sense of national pride. The American captain, Stephen Decatur, was lionized by the public and became a 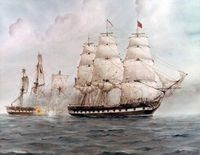 The Macedonian vs. United States

national hero. The Macedonian was renamed the USS Macedonian and saw long service in the U.S. Navy, however, both the Macedonian and the United States were driven into harbor in New London, Connecticut, and blockaded by a British squadron for the remainder of the war.

Back to Macedonian Hornpipe (The)