Machine without Horses (The)

Back to Machine without Horses (The)

MACHINE WITHOUT HORSES, THE. English, Scottish, Canadian; Country Dance and Jig. Canada, Cape Breton. G Major. Standard tuning (fiddle). AA'BB'. Many have found the title for this tune curious, and not a little ambiguous. It has been a fairly recent suggestion--often repeated--that a 'machine without horses' refers to either the sedan chair or the chain plough, both of which are 'machines' in the archaic sense of the words. The sedan was an enclosed chair for one passenger carried on poles by two or more bearers. It was introduced into England by Sanders Duncombe in 1634, and by the 18th century it was the equivalent of a one-person taxi. The name 'sedan' derives from an Italian dialect word for 'seat'. 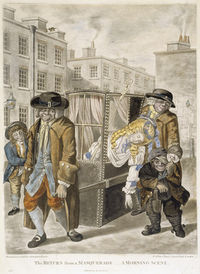 "The return from a masquerade - a morning scene", Robert Dighton, 1784. (A young lady dressed as a shepherdess with staff slumps in a sedan chair. Asleep or drunk, her head and shoulders hang out of the side window. The two porters smile and a dwarf chimney sweep carries a mask.)

However, plausible, there is no direct evidence for this explanation of the title, and the question of the meaning should remain open for investigation. "The Machine without Horses" is also a Scottish Country Dance, attributed by RSCDS to a 1772 publication by London publisher David Rutherford (although this cannot as yet be verified).

Back to Machine without Horses (The)