Back to Mad Doctor (The)

MAD DOCTOR, THE. English, Country Dance Tune or Jig (6/8 time). A Major. Standard tuning (fiddle). AABB. A 'mad-doctor' was a physician who worked with the mentally ill, who were notoriously ill-cared for in such institutions such as Bedlam, where confinement was the only intervention. William Battie was a prestigious "mad-doctor" of the mid-eighteenth century who was instrumental in making the role of the mad-doctor respectable. He "rose to become President of the Royal College of Physicians" (Porter 1987, 167), and was one of the founders of St. Luke's Hospital. An admirer of Locke, Battie advocated a "reasoned therapeutic optimism" in place of the 'cures' of the day, which included blood-letting, purges, blistering and cold-water immersion. He stressed the need for strict, humane management and declaring that "the Regimen in this is perhaps more important than any distemper" (quoted in Porter 1987, p. 207) 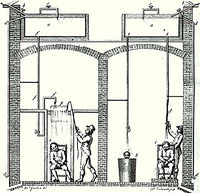 There is a "Medecin Extravagante (Le), or The Mad Doctor" in Thomas Hurst's Cotillons, Made Plain and Easy (London, 1775), but it is a different tune.

Back to Mad Doctor (The)[edit]