Mad Moll of the Cheshire Hunts

Back to Mad Moll of the Cheshire Hunts 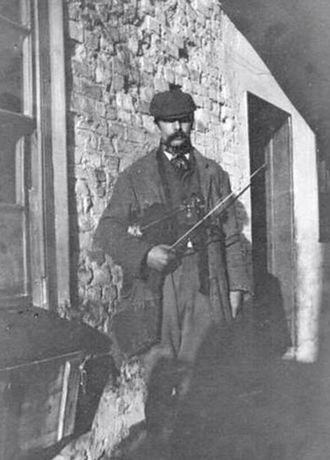 Fiddler thought to be John Locke (1871-1947), Leominster, Hereford
MAD MOLL OF THE CHESHIRE HUNTS. AKA and see "Rink a Tink." English, Hornpipe (while time). G Major. Standard tuning (fiddle). AB. The tune, a version of the older and once-popular "Rink a Tink," was collected by Cecil Sharp from the playing of John Locke of Leominster, Herefordshire. Sharp made wax cylinder recordings of Locke, described as a "gipsy fiddler" in 1909. Sharp also collected tunes from John's brother, James Locke of Newport, Shropshire, (the similarly-titled "Mad Moll of the Cheshire Hounds" is from James). The Old Swan Band notes (Wild Goose WGS378, 2011) that "John and James were members of the famous Locke family who traveled extensively in the area of the Welsh/English border. One of their regular haunts was Gorsley Common on the Gloucestershire/Herefordshire border – a rough and lawless area dreaded by wayfarers."

Philip Heath-Coleman, in his article "Name that tune: Waifs and Strays of English Melody" [1] (2010), remarks: "I'd like to fly a rather fragile kite here, and wonder if the brothers knew the titles (at least) of the two tunes Mad Moll and the Cheshire Rounds (heard as "Cheshire 'ounds"), and offered this to Sharp for want of any other name, but I can offer no suggestion as to how they came to know the names of two such archaic tunes, or why they might have invented the compound name - or should that "of" (" o' "?) be an "or"?"

"Mad Moll of the Cheshire Hunts" is still played as a vehicle for a morris dance (the Titterstone Clee or One Cheese Toastie on the Bar) nowadays.

See also listing at :
Hear the tune played on guitar by Will Fly on youtube.com [2]

Back to Mad Moll of the Cheshire Hunts