Back to Madame de Lenglée[edit]

MADAME DE LENGLÉE. Scottish, March (4/4 time). E Major. Standard tuning (fiddle). AABB. Composed by Scots fiddler-composer J. Scott Skinner (1843-1927). Mme de Lenglée taught dancing with Skinner (who, in addition to his skill as a fiddler, was an accomplished dancer and dance teacher). She was also the widow of his brother Alexander(Sandy) Forbes Skinner, who died in 1883.

The University of Aberdeen's J. Scott Skinner Collection notes that "Madam Finart de Lenglée was the daughter of a French General, a recipient of the Legion d'Honneur. She assisted Skinner and his adopted daughter Jeannie Meldrum with his dancing classes during his wife Jean's long illness. The note at the bottom of the page, 'revised Feb: 14 '96', could suggest that Skinner wrote this as a Valentine's Day present for Madam de Lenglée." [1] 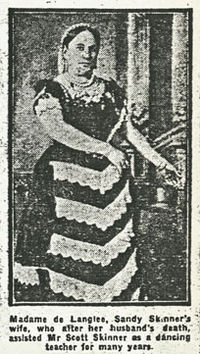 Back to Madame de Lenglée[edit]