Back to Magic Girdle (The)

MAGIC GIRDLE. English, Country Dance Tune (9/8 time). C Major. Standard tuning (fiddle). AABB. The Magic Girdle was a burletta in 2 parts produced in 1770, composed by François Hippolyte Barthélemon [1] (1741-1808), a French violinist, pedagogue, and composer active in England. The opera was based on a simple text by Jean Jacques Rouseeau ("La Ceinture magique"), set to newly composed music by Barthélemon, and performed at Marybone Gardens with main role going to Mary (or Polly) Young [2] (1749-1799), a musician, singer, composer and actress who became Barthélemon's wife. He is said to have composed the opera expressly for her benefit. 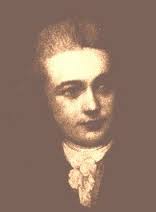 During a sojurn to Dublin in the winter of 1771-72, O'Keefe took in some of the couple's performances, and he recorded:

...he made a most admirable concerto rondo, on a common, but very pretty tune; his playing it was of the first order--most delightful. He was a very little man, but handsome, and a neat figure.

He also approved of Mrs. Barthélemon's singing, and said that she was a "bewitching sprite" with a charming face and small figure.

Back to Magic Girdle (The)